The digital world has several entities that have brought us the most modern, innovative, and convenient devices of our time. While there are plenty of such entities, there is only one that really has trumped the industry and stands out the most to us all on an international scale: Apple.

As of August 2018, Apple Inc. was the first company ever to reach a worth of $1 trillion dollars, according to Investopedia. Then, just two years later, the company crushed that number and record when it reached $2.08 trillion dollars.

We have all at some point looked at Apple computers for sale along with their many other products, but we’ve also wondered about Apple’s rise to riches. How exactly has Apple made it to where it is today? Let’s dive right into the past of Apple and how it got to its astounding international presence to this day.

Apple Inc.: From Garage to Conglomerate

Apple Computers, Inc. was founded by Steve Jobs and Steve Wozniak on April 1, 1976. The two visionaries had previously dropped out of college and then pursued their idea of making a computer that is a more user-friendly device that could be available to anyone, specifically in their homes.

“The two Steves” wanted to change the way the world not only used computers but how they viewed them. In 1976, they took their new project to– believe it or not– Jobs’ garage! There, the two built Apple Computer I (also referred to as Apple 1 and Apple-1), their very first desktop computer. However, it lacked a monitor, casing, and a keyboard.

Wozniak was the one to design the computer, but it was Jobs’ ideas that pushed Apple into the consumers’ eyes. They first pitched their prototype to the Homebrew Computer Club in July 1976, which was a computer hobbyist group they were a part of and that ended up playing a large role in the development of Silicon Valley. The club has even been referred to as “the crucible for an entire industry.”

From there, Jobs planned to sell “something like 50” circuit boards to a computer store in California called Byte Shop. Jobs and Wozniak intended on selling each circuit board for people to build the computers with. However, the Byte Shop wasn’t “biting.” The owner Paul Terrell said he was only interested in the Apple I computers fully assembled and would buy 50 of them at $500 apiece.

However, financing the building of the computers wasn’t easy for the two. Jobs actually sold his only means of transportation: his VW minibus. He received a few hundred dollars for it, then got around by bicycle. Wozniak ended up selling his HP-65 calculator, for which he received $500.

The two continued creating and selling Apple 1s until the model was discontinued on September 30, 1977. That was because their next creation had emerged on June 10, 1977: the Apple II. The Apple II became the most highly successful mass-produced microcomputer.

The Apple II–and several models of it–continued to be produced and sold well into the 1990s, meaning that it was mass-produced for nearly 17 years. In that time, Apple sold 5 or 6 million units. The profits were remarkable in the first year alone, which was $770,000. In the second year, the revenue leaped to $7.9 million, then $49 million in the third year.

The first Macintosh computer was released on January 24, 1984, which was created in order to not be crushed by IBM’s first PC that was released in 1981. It became one of the first most successful personal computers and it was the first to feature a mouse and a graphical user interface. It was priced at $2,500 and set the stage for Apple’s future creations.

Even though Steve Wozniak left Apple in 1985 because he didn’t feel a connection with the direction of Apple, the company continued (and continues) to create innovative electronic products that would change the world forever. 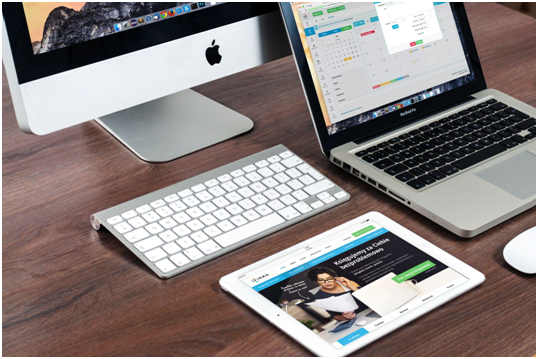 Since its inception, Apple has churned out numerous products, devices, and accessories. The types of Apple computers for sale have vastly changed from Apple-I and there were multiple models throughout the years that had been major successes (like the Macintosh) and some were flops (like the Apple Lisa).

Regardless, Apple has since led the industry and been a staple in it for decades. They’ve created desktop computers, laptops, tablets, phones, watches, headphones, media players, and plenty of other influential products.

Apple, as mentioned above, is worth $2.08 trillion dollars as of 2020. The company is only expected to grow further and we can’t wait to see what they come up with next.

If you are looking to browse through some of the highest quality used Apple computers for sale, look no further than our offerings here at Mac of All Trades. We have an abundance of used Apple products for unbeatable prices. If you have any questions, feel free to call us at 800-581-8987.

You are sure to find precisely what you are searching for among the large selection of used MacBook Pros that we have available for purchase. Do you need assistance to buy a MacBook Pro? Please contact us at 800-581-8987 and we will be pleased to assist you!